The $100,000 Glove: Reflections on Object Based Learning

It was March of this year, and as I was walking down the hall of East Middle School, I passed the  library.  A guest speaker caught my eye.  I slid in as unobtrusively as possible, but I could have marched in with clanging cymbals and it wouldn't have mattered; Daryl Woods was keeping middle school students silent and rapt with attention.

Mr. Woods, a manager at NASA who works on programs for the International Space Station, was discussing the final frontier.  I saw an object, a bit frayed and worn, being passed among the students.  As it reached the back of the room, the last student took pity on my curiosity and gave it to me.  It was an astronaut suit glove.  Just as some middle schoolers had done, I automatically slid my hand inside.  A nearby teacher came over to whisper, "That glove has been in space.  It costs $100,000!"

I marveled and made a one-tenth of a million dollar thumbs up.

Here I am, wearing a $100,000 glove that has been in space. Not a bad way to start the day. Special thanks to NASA's Daryl Woods for spending time with students at East Middle School! #shelbyedchat
A post shared by Adam Watson (@watsonedtech) on Mar 13, 2017 at 12:48pm PDT

In all the theoretical, abstract talk about air pressure and solar radiation and the fragility of human life in the merciless vacuum of space that I have read or seen in documentaries, I was never moved as much as I was when wearing that glove.  Someone before me had worn this and touched the cosmos.  And a pair of these cost more than my house.  Space travel was suddenly not as mundane or as easy or as dismissible as our present near-apathy would have you believe.  It was concrete; it was now.  Interacting directly with the object had sparked something in me -- wonder, and whimsy.

And that is what object based learning (OBL) is all about.  It is, as defined by David Smith, a "student-centered learning approach that uses objects to facilitate learning" where students are "interrogating physical artefacts" that become "multi-sensory 'thinking tools'" (per his excellent article "What is Object Based Learning?").    Another powerful OBL definition in under 140 characters:


1/2 Objects that tell human stories and create a sense of investigation. Objects that you have to look at closly to puzzle out #AskACurator
— Orange Museum (@ORMuseum) September 13, 2017

As the source of the tweet suggests, the idea of "object based learning" could easily go back to the best museum experiences, where the intimacy of literally touching history, or peering at something as close as the end of your nose, invites questions and inquiry.  However, usually a museum suggests the need for a field trip that entails leaving your school.  Or does it?

The public school district in Grand Rapids, Michigan was in steady decline for two decades.   Families fled as the academic performance of the schools sank.  When Teresa Weatherall Neal took over as superintendent, she needed to shake the system up quickly.  In the fall of 2015, one of her boldest moves was placing a secondary school inside of the Grand Rapids Public Museum.   As Beth Hawkins details in her article "When Your School is a Museum," the innovative Grand Rapids Public Museum School earned the district a multi-million dollar grant.  With students interacting directly with the museum's vast collection, it's a perfect example of hands-on OBL.  In a way, it's a "flipped field trip," as the day to day learning occurs inside a museum and home is where they ponder how to next interact with the curated materials or synthesize their schema.  (More on their curriculum and different approach to schooling is available here.) The Grand Rapids Public Museum School continues to add to its roster and it is on track to be a grade 6-12 school by 2022.

Housing a new school inside a museum might be a difficult proposition, especially if you are in a suburban or rural environment with limited large scale facilities.  And yet, many small towns at least have a historical society or a small local museum.  What if a teacher or a school partnered with them?  When inside such a place, what could students learn from their collected objects?  What unique learning would they experience?  And what projects could the students accomplish that will enlarge and enliven the goals of such a museum or historical society for the twenty-first century?

The collections inside a museum create OBL opportunities, but when seen as a whole, the museum invites the idea of place based learning, where the museum itself is the centerpoint of learning on multiple topics.  (Other examples could be learning about the life cycle of trees from being inside an actual forest, or discussing Gettysburg while walking the battlefield.) But OBL could be seen as the heart of several pedagogical overlapping circles. OBL is often a close kin to experiential learning, as the exposure to an object creates a desire to do and apply in order to gain knowledge.  OBL and project based learning also have a relationship, in that both depend on authenticity and impact in the real world.  Certainly one or more of these learning strategies could include OBL.  So how could OBL alone function as an overarching principle in a class?

Here is where the popular idea of "100 Objects" gets traction.  Imagine grounding a class conceptually by teaching history, art, sports, literature (perhaps find metaphorical objects that tie into the text's theme!), math and science through approximately three objects a week.  Try searching "100 objects" in your favorite online bookstore and you can see the depth and variety of subjects that apply this idea.  It has even affected pop culture, as the below Whovian volume I recently found at a used book store indicates: 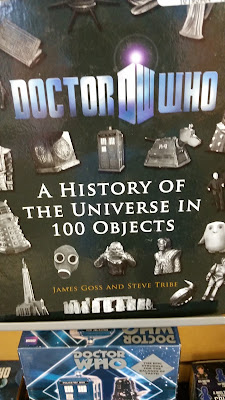 In a perfect world, you could pass objects of historical significance around, but there are other options:

We come full circle back to middle school.

A few weeks ago, as I was drafting this entry, my eighth grade daughter had a mock schedule where I traveled through her classes.  Her social studies teacher demonstrated how he shares, about once a week, an historical "artifact."  It may just be a slide on the screen, but the mysterious objects shown without context or explanation spark questions and creative analysis.  What is it?  How is it used?  How would the use and invention of the object be influenced by the time it was made in? His goal is to get students to think like historians.  OBL, practically in my backyard!

If object based learning, with its "multi-sensory" authenticity, creates nothing else but a shift in the pedagogical purpose of a class -- from, say, learning history to being historians -- it has important value.  For that alone, it deserves a thumbs up.